Showing posts from March, 2010
Show all

United States Senator Tom Coburn, M.D. has been criticized specifically for stopping and saying "No!" to several pieces of legislation in various reviews . While any and every Senator is criticized by some members of their constitutency, because of the multiple "holds" that Dr. Coburn puts on bills in Congress in order to address issues of spending, he has earned the moniker, "Dr. No." It was nice, then, that at the conclusion of our personal meeting with Dr. Coburn today to hear Dr. Coburn say to me, "Well said!" Dr. Coburn has several Town Hall meetings taking place in and around Oklahoma in these few days of his Easter Break. I attended his meeting in OKC today - with perhaps 400 in attendance, many of whom where vying for an opportunity to ask him questions, but less than 15 got the microphone for even a few minutes. In view of this, it was a particular delight to have had a personal meeting with Dr. Coburn in his office where he gav
Post a Comment
Read more

Download now or preview on posterous Stewards of Creation - Haiti.pdf (198 KB) In this article, I (Levi Jones) discuss our role as stewards over creation.  Along with that idea, I discuss a recent mission trip in Haiti in which I participated.  Several of the challenges that face Haiti could potentially face us if we are not careful to preserve the gift that we have been given.  As such, it is imperative that we look carefully at the long-term consequences of our actions, rather than simply counting the short-term benefits. Posted by Levi Jones. Posted via email from Eupan Global Initiative
Post a Comment
Read more

By ~ Marty Alan Michelson March 29, 2010
As you know, we have been advocating toward efforts regarding Sustainability issues locally (in OKC Metro and OK) and about Genocide Intervention internationally. (And, of course, those of us involved in EGI stay aware of many other issues where we might advocate toward eupan!) Because we have recently met with and will meet again this week with Senator Tom Coburn, M.D., I want to share the following: Dr. Coburn is hosting a free, public town hall meeting next week. Wednesday, March 31 2 – 3 p.m. Metro Technology Center Springlake Campus Auditorium 1900 Springlake Dr. (NW of 36th and Martin Luther King, Jr.) Oklahoma City, OK Additionally, as a way of sharing I will add here: Our showing of the film PRAY THE DEVIL BACK TO HELL at the Ronald J. Norick Downtown Library was a "success" for those who came out. I personally had a good conversation with several persons after the film concluded. Thank you to those who helped organize and welcome (again) to those who we me
Post a Comment
Read more

Pause with your lights out?

By ~ Marty Alan Michelson March 27, 2010
As a member of the Eupan Global Initiative I can not speak for all of us, but I think most of us in the Eupan Global Initiative are not necessarily committed to "the earth" but we are certainly and deliberately mindful of how we live on and with creation toward advancing the good for the all!  Personally, I believe anything that causes us "pause" in life to rethink how we individually contribute to the pain of others - or the peace for others, is worthy of serious consideration.  Consider your part in our life's larger systems - would you? From the Earth Hour website: Mission, History & Earth Hour 2010 On Earth Hour hundreds of millions of people, organizations, corporations and governments around the world will come together to make a bold statement about their concern for climate change by doing something quite simple—turning off their lights for one hour. In the U.S. where we are already feeling the impacts of climate change, Earth Hour sends a clea
Post a Comment
Read more

So many great things going on in our shared efforts and work toward eupan ! Don't forget about our 6:00 p.m. showing of Pray the Devil Back to Hell at the Ronald J. Norick Downtown Library - tonight. Ronald J. Norick Downtown Library 300 Park Avenue Oklahoma City, OK 73102 (405) 231- 8650 The library has been advertising this on our behalf - and any and all are welcome for the free showing, underwritten by the generosity of partners toward eupan . Posted via email from Eupan Global Initiative
Post a Comment
Read more

Moving ahead in advocacy

By ~ Marty Alan Michelson March 23, 2010
Several of us in Oklahoma City working toward eupan goals specifically connected to anti-genocide and awareness intervention,  met last week with Dr. Coburn's Field Rep. Craig Smith.  We had a delightful meeting with a very kind person who took the time to listen to our concerns and issues. This coming Monday, March 29th, I (Marty) have meetings with Representative Mary Fallin's office  and separately with a representative in Senator Inhofe's office on Monday the 29th. In our shared work toward advocacy and raising awareness, I am excited to report that as a result of last week's meeting with Senator Coburn's Field Rep - I have just today been called and invited me to a personal time with Senator Tom Coburn after a "town hall" presentation that Dr. Coburn will have on Wednesday the 31st.  I have no illusion that I'll be the only invited personal to follow up with the personal meetings after the town hall meeting . . . but I did get a personal phone
Post a Comment
Read more

Live Earth Oklahoma will hit Oklahoma City on April 16-18, 2010 in the city's Adventure District.  This district features attractions such as the Oklahoma City Zoo, Remington Park, the National Softball Hall of Fame and Museum, and a handful of other places to visit.  However, these venues will take a back seat during Live Earth Oklahoma's two day eco-festival to all of the activities helping people become more aware of issues of sustainability. One issue in particular that the Live Earth Oklahoma Eco-Festival will promote is water conservation and opportunities to help provide clean drinking water around the world. The Eco-Festival will include a 6k "Run for Water" an Eco-Village, live music, educational seminars and much much more. For more information go  here . For more information about the "6k Run for Water" or to register go  here .     Eli Pagel Posted via email from Eupan Global Initiative
Post a Comment
Read more

Thanks to Senator Tom Coburn and his State Representative 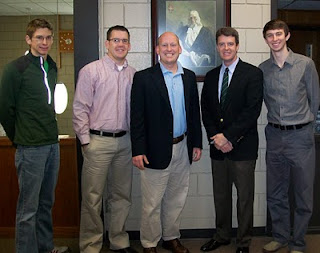 Several from the Eupan Global Initiative had the opportunity to meet today with Mr. Craig J. Smith, Field Representative for Senator Tom Coburn's office.  Mr. Smith is one of six representatives who serves as the "eyes and ears" for Dr. Coburn, as both Coburn and Smith serve unique roles in representing the voice(s) of Oklahoman(s) in our U.S. Federal System of Government. Mr. Smith was kind and gracious and offered a clear and discerning perspective to Dr. Coburn's intentions and role as a policy-maker.  Our conversation with Mr. Smith emerged specifically out of the work we have been doing for the past number of months since we agreed in 2009 to focus on issues of Genocide.  Our work has been emboldened by our partnership role with GI-Net and the Carl Wilkens Fellowship . As we met, we pressed Mr. Smith to advise Dr. Coburn that we are concerned for the free and open elections forthcoming in Sudan (April 11.)  While we are hopeful for the process that is unde
Post a Comment
Read more

SPRING 2010 Thanks to the Houston-based Apache Foundation and the Tree Bank Foundation, over 3,000 free trees have been made available to households in Oklahoma City. At this time, plans are underway to initiate a fourth “Great OKC Tree Give-Away,” with over 500 trees scheduled for distribution in April. Registration will open on March 19, 2010, and trees will be available for pick-up on April 24. For general program information, you may call 604-0041. TREE FAQ’s: How can I get a tree? Citizens who want a free tree must register for one via our online registration system or by phone. Registration is now closed, but will open at 9:00 a.m. on March 19, 2010. Registration will remain open until all trees are reserved. www.treesafterthestorm.org www.treelink.org via okc.gov Posted via web from Recent Reading & Reflections: Collecting Random Thoughts In No Particular Order
Post a Comment
Read more

2009-10 SPEAKERS Ishmael Beah A Long Way Gone: A Story of Redemption and Hope Petree Auditorium Kirkpatrick Fine Arts Center N.W. 25th St and Blackwelder Ave 7:30 p.m., Wednesday, April 14, 2010 Perhaps all that need be said about Beah’s skill as a storyteller is that while we know how he made it out–the book in our hands is proof of that–we are glued to every page by the very real possibility that this story is not going to end happily…Read his memoir and you will be haunted…It’s a high price to pay, but it’s worth it. Newsweek Ishmael Beah was born in Sierra Leone on November 23, 1980. When he was eleven, Ishmael’s life, along with the lives of millions of other Sierra Leoneans, was derailed by the outbreak of a brutal civil war. After his parents and two brothers were killed, Ishmael was recruited to fight as a child soldier. He was thirteen. He fought for over two years before he was removed from the army by UNICEF and placed in a rehab
1 comment
Read more

Advocacy as an "Added Voice" toward Eupan

I am thrilled to share that friends and co-labourers committed toward advancing eupan have made a diligent effort to participate toward effecting justice - with success! A few miles from where I sit in Bethany, for nearly two weeks - persons from around the country and several local friends and EGI advocates have been camping outside Dr. Tom Coburn's office in Oklahoma City in an effort to raise awareness about a bill he had placed a hold on. My own part in this effort was small - sending a letter to Dr. Tom Coburn and offering food to those camping out  - but many persons, working together, adding their voice (! advocacy ! ) to the issue, have won a victory on this matter. More here:  Dr. Coburn Says Yes! What a privilege to be partner with others as each plays a different and unique role in extending the good for the all! ~ marty alan michelson, ph.d. Posted via email from Eupan Global Initiative
Post a Comment
Read more

Pray the Devil Back to Hell - in Oklahoma City

By ~ Marty Alan Michelson March 09, 2010
We will be screening Pray The Devil Back to Hell in Oklahoma City at the Downtown Ronald J. Norick Library. Information from the libraries' website is available here:  PRAY THE DEVIL   Many other exciting things happening in our shared efforts toward eupan .  We will be sharing more soon! ~ marty alan michelson, ph.d. Posted via email from Eupan Global Initiative
Post a Comment
Read more

By ~ Marty Alan Michelson March 01, 2010
We partnered with students from Southern Nazarene University - to partner with students in STAND at Oklahoma University. The OU students and campus were exceptional hosts to many persons present - and specifically to Thomas Van Dyke with Heroes Serving Humanity. The following notes and reflections are a guest blog entry by Destry Howland - a student at SNU that is working toward eupan . She writes: Tuesday 23 at 7pm OU’s student group STAND, Students Against Genocide, hosted Dr. Thomas Van Dyke. Van Dyke spoke about the slow genocide in Burma, how it was being done, compared it to genocides in Darfur, and what Heroes for Humanity and the Free Burma Rangers are doing in Burma. The military in Burma, the State Peace and Development Counsel, has had Aung San Suu Kyi, their legitimately elected Prime Minister imprisoned (mostly house arrest) for about twenty years. She is the only person to have received the Nobel Peace Prize while imprisoned. The SPDC has an army that is rather untr
Post a Comment
Read more
More posts