"What is the point of being a religious leader if you don’t say something that’s difficult for the people who follow you?"

Quote and extended conversation from On Being with Rabbi Sacks 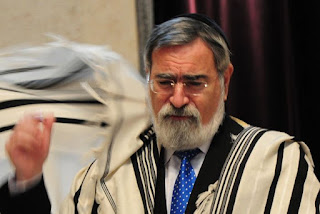 RABBI SACKS: The Bible is saying to us the whole time, don’t think that God is as simple as you are. He’s in places you would never expect him to be. And, you know, we lose a bit of that in English translation. Because, when Moses, at the burning bush, says to God, “Who are you?” God says to him three words: “Hayah asher hayah.” And those words are mistranslated in English as “I am that which I am.” But in Hebrew, it means “I will be who or how or where I will be,” meaning, don’t think you can predict me. I am a God who is going to surprise you. And one of the ways God surprises us is by letting a Jew or a Christian discover the trace of God’s presence in a Buddhist monk or a Sikh tradition of hospitality or the graciousness of Hindu life. You know, don’t think we can confine God into our categories. God is bigger than religion.


MS. TIPPETT: And at the same time — and I think you would say it as an “and” rather than a “but” — there is also a special relationship that is evident in those texts and a covenant that is particular to the Jewish people. And even as you honor the dignity of difference, you are upholding the dignity of that particularity. So talk to me about how, theologically, how you bring those things together, how they’re not a contradiction.


RABBI SACKS: By being what only I can be. I give humanity what only I can give. It is my uniqueness that allows me to contribute something unique to the universal heritage of humankind. And I sum it up — the Jewish imperative — very simply. And it has been like this since the days of Abraham. To be true to your faith and a blessing to others regardless of their faith.


MS. TIPPETT: Now, I know that there — that what you’re saying has been difficult for some of your fellow Jews in Britain, that The Dignity of Difference was controversial.


RABBI SACKS: What is the point of being a religious leader if you don’t say something that’s difficult for the people who follow you? You know, you’ve got to challenge them and be challenged by them. You have to listen when they say, “Chief Rabbi, you’re going too far or too fast for us to follow.” And then you say, “OK, we'll slow it down, but I want you to come with me.” I will not allow myself to be a lone voice within Judaism.

Posted by ~ Marty Alan Michelson at 8:51 AM No comments: