Showing posts from 2019
Show all

Parental Love & Care for All 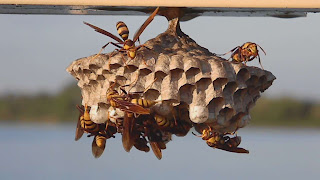 I'm 48. My mom is 78. I'm "the baby" of the family, the last of four children. We were raised to take care of ourselves even as teenagers, making our own meals, getting jobs, and so forth.  When I moved out of my parents home to go to attend University when I was 18, for all intent and purposes, I've never been under my parents care since then. And yet, a person can never fully break free from the care of a loving parent. Today I shared with my mom that I was headed outside to spray and eradicate a developing wasps's nest on the eave of our house. My mom immediately stated:   "You be careful! You know! You're allergic to bee stings!" Ha! I laughed and told my mom! "Yes! Mom! I remember well and know I'm allergic to bee stings!"  [ I have had a prescription for an epinephrine pen in the past, as, the last time I was stung I ended up in the Emergency Room! ] What cracks me up about this - and which is a tender momen
Post a Comment
Read more

By ~ Marty Alan Michelson September 11, 2019
I didn't quite believe "the world had changed," as many claimed on 9/11/2001. In many ways, I still do not believe the world changed that day. In fact, if anything, 9/11 may have only reflected for us (Americans), back to us, and forward for us into our future, who we *already* were, not that we had changed. AND yet, I do believe *our responses* (as Americans) to the weaponization of airplanes on that day, striking at the "financial center" of America has demonstrated we shifted - though I believe it was a shift of magnitude in the same direction of who we already were.   We did not become different.   We only changed in the magnitude of our being more who we already were. It seems to me the Imperial Claims of American Dominance are now now more narrow, more violent, more acquisitive, more cash-strapped-cash-hungry, more belittling of races, religions, genders and cultures, and more war mongering than ever.   And, it does not bode well
Post a Comment
Read more
More posts