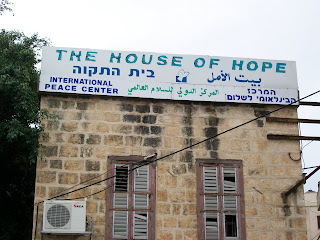 While traveling through Jordan, Israel, and Palestine on an educational tour I lead, I was able to meet Elias Jabbour, working with the House of Hope International Peace Center.

There is something so very real about meeting with persons who live elsewhere, hearing them share their stories. 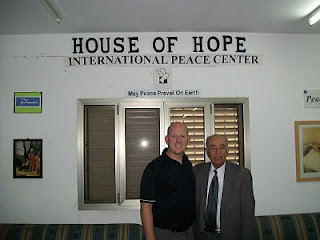 Elias shares some of his stories in a book he has published - and he has been influential in working with numerous groups attempting to bring peace to the Israeli-Palestinian situation. His work includes working with the Center for Religious Tolerance and The Middle East Project, to name just a few of his connections. I doubt he would see them as "connections" or "networks" in anyway like modern business tries to work through connections and networks, though. I think he would see his work as a calling, and his connections and friendships. I know I felt that he wanted to genuinely be a friend to me and the group of persons with me when we met with him. The above link mentions Jabbour's work with Sulha, more can be read here.


The complexities, hopes, possibilities for conflict and peace in and with Israelis and Palestinians is complex - incredibly, individually, socially, politically, and in many other ways complex. But, "both" (there really are myriad) "sides" (sides sounds so ready for violence) could do more to extend the "olive branch" of peace in a land where olive trees can be seen from just about any vantage point.