Leaders to war, followers to peace.

I know very little about the Iranian cartoonist who created this image. The image has captured my thoughts. 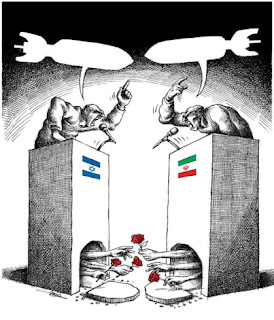 "Leaders to war, followers to peace"  by Mana Neyestani

As presented by the cartoonist, the flags represent Israel and Iran.  I post the cartoon here, though, not as a political commentary on either nation.  I think we could place the flag of many separate nations on the podiums and the cartoon would still work!  That fact intrigues me.

The speakers at each podium are images of each other - truly undifferentiated.  They are the same person - despite the flag on their podium - lambasting the same words, though no words appear in their respective speech-balloons!  Their words do not matter - only the "shape" of their speech is important - "bombs" of impending destruction.

We can not see the face of those who exchange flowers - only that they reach out, hidden from view - trying to reach the other.  Their hands do not reach, though - the podiums are too far apart to allow for their exchange,  despite their attempt.

I wonder if the title shouldn't be different, though.

"Leaders rhetoric of destruction, citizens blossoming exchange"  is one of many titles I considered.

The image is not perfect - and the title - including my own - is not precise.

And yet, the image evokes my reflection - and I hope our reflection.

What if we took the time to consider the bombastic rhetoric of war mirrored in a few leaders as the minor voice that is challenged by the gift-exchanging hopes of the many citizens?

What if the voices of the many hoping for peace would proclaim softly, but decisively, their words of peace - enough to drown out the few who call for violence?